The survival game mode is one of the biggest parts of the game. The player has the possibility to fight an endless amount of monsters and test if they have the required skills to survive until the end.

The player has to survive a fixed time until they win the survival mode. The game counts as lost if the headquarters is destroyed and the player dies, thus having no way to respawn.

If the player upgrades their headquarters a special attack wave gets triggered.

Units placed on the map scale with difficulty and the monster strength increases the closer you are to the map edge.

With difficulty limit being creatures_max_difficulty

Survival can be played on 4 different biomes,⁣ each biome having different advantages and disadvantages, as can be read on their direct pages.

You unlock the other survival maps by beating the previous map, with at least some difficulty chosen. 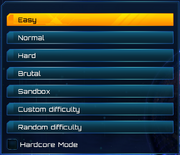 Difficulties are the settings which modify the whole survival experience the most. Each difficulty changes the survival gamemode in one way or another.

If the player dies once - even if their headquarter is still standing - the game is lost.

No waves spawn automatically, players have to send those themselves if they want to.

Via the sandbox control menu all kinds of enemies can be spawned, events created or player settings manipulated.

This difficulty opens up another GUI page where the player can choose from lots of different options to create the difficulty they wants.

Most of the difficulty settings are random here, the player can only configure 5 values:

Wave interval duration, game duration, warm up duration, map size and if they want to have the sandbox control panel.

Everything else is always randomized.

If a player is streaming the game he can choose to connect his stream to those ingame events via Twitch. Once connected, players can vote for ingame events to happen.

The streamer has the possibility to enable / disable both positive and negative events as well as to change the voting time.

Rule: The option with the most votes happens - if 2 options have the same amount of votes, it's randomly decided which option happens.